Book Riot has a list of recommended reads for Slytherins.

Also on the site, a guide to some must-visit locations in England and Scotland for Harry Potter fans.

To mark the Kindle’s tenth anniversary, the Guardian examines how ebooks have changed reading.

Millennials are increasingly blamed for all kinds of social phenomena, but the Instagram-fuelled shelfie trend is good for books sales. 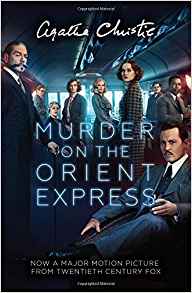 Love Murder On The Orient Express

? EW has suggestions for 12 books for you.

The Independent has a look at NaNoWriMo, the challenge to write a 50,000 word draft of a novel in a month.

Dame Jacqueline Wilson will be honoured with a BAFTA Special Award at this year’s British Academy Children’s Awards, held later this month.

Penguin Random House UK has launched a new, “inclusive” scheme, called Home Sweet Loan, to support its employees with the cost of a deposit of a rental property.

Amazon has introduced a minimum order fee for its Prime Now same day delivery service, and people are not happy.

Harriet Harman, Nick Clegg and former Greek finance minister Yanis Varoufakis are among the writer politicians shortlisted for the Parliamentary Book Awards, voted for by parliamentarians.

In Bonnets at Dawn, Nancy Holder talks about her comic Mary Shelley Presents, which features an adaptation of Elizabeth Gaskell’s The Old Nurse’s Story

The guest on Books and Authors this week is Celeste Ng, author of the newly published Little Fires Everywhere

and the Everything I Never Told You

Is interest in crime novels declining in these turbulent times? Ian Rankin weighs in on the Today Programme.