In an occasional series, we’ll be catching up with various British authors and finding out about their books and their reading lives. This week, we hear from Jennifer Saint, whose beautiful book Ariadne is a treat for everyone who loves retellings of mythology.

You can buy it in the US here, and in the UK here (and the British version is gorgeous, so that’s also the place to go wherever you live if you want that cover).

Please tell us a bit about yourself and your latest book.

My name is Jennifer Saint and I’m a thirty-eight year old novelist living in West Yorkshire, England with my husband and two children. Before I wrote Ariadne, I was a high school English teacher for nearly thirteen years. I’ve always loved Greek mythology – so much so that I transferred sixth form colleges when I was seventeen so that I could study Classical Civilisation and subsequently went on to do a degree in it. Ariadne is my first novel and I wrote it as a New Year’s resolution – I’d always wanted to be a writer but had never really focused on a project and committed to it properly. This one was different though; I fell in love with the story and characters and couldn’t stop thinking about them. I wrote the first draft in eight months, signed with my agent and to my utter (grateful!) astonishment, I had a publishing deal before the end of that year. It really was a dream come true!

Ariadne tells the familiar story of Theseus and the Minotaur from the perspective of the woman who made it happen – the woman who saved the hero. It tells us what her life was like before Theseus came to Crete, how her monstrous half-human brother was born and what happened to her after she betrayed her family to help their enemy. Ariadne and her younger sister, Phaedra, are brave and passionate young women who live in a world ruled by capricious gods and arrogant men. They’ve always been secondary characters in their own legends, but in this novel, they tell their side of the story at last.

What’s the last book you fell in love with and haven’t stopped thinking about and recommending? 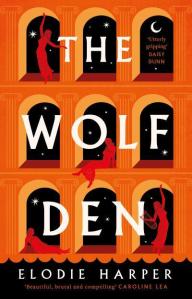 I read an advance copy of The Wolf Den by Elodie Harper last autumn and have not stopped telling people to buy it since! It’s now out in the U.K. and if you haven’t read it, you need it in your life. It follows the lives of the women enslaved in the notorious Lupanar brothel of Pompeii. The main character is Amara, a headstrong young women sold into prostitution and determined to secure her escape to freedom. Despite the darkness of their circumstances, this novel gives voice, dignity and agency to these women. Elodie Harper makes them vibrant, living characters with full lives, hopes and dreams and she tells their stories with hope, wit and heart. She renders the ancient world of Pompeii in atmospheric and evocative detail and best of all, it’s the first in a trilogy so there is still more to come!

What’s the last book you bought for someone else?

I bought The Night Tiger by Yangsze Choo from Bert’s Books, an online independent book retailer who send your books beautifully tied up in a gorgeous co-ordinating ribbon! It’s such a treat to receive them – as well as making lovely gifts to other people, when you’re buying for yourself it’s like getting a present in the post.

I bought this book for a friend and I think I’ll be giving it to many more people in the future. Based on Malaysian folktales, this enchanting and alluring novel tells the story of the young houseboy Ren and apprentice dressmaker Ji Lin whose lives coincide over a dead man’s severed finger and strange tales of tigers who can turn into men. Yangsze Choo transports the reader into another world, crafting a compelling story infused with mystery and magic.

What’s the last book someone gave you? 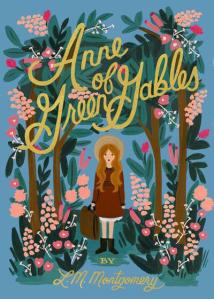 I am very lucky to receive a lot of books from publishers and authors but the last one I had as a personal present was a boxed set of the Anne of Green Gables series from my mother-in-law for my birthday. I re-read these books every year and have done since I got the first one for my tenth birthday and fell in love. Set in the late 1800s, this is an adventure story full of escapades, mishaps, dreams and imagination as it follows the journey of Anne Shirley, a red-headed orphan mistakenly adopted by two siblings whose lives end up as transformed as her own. Lucy Maud Montgomery’s powers of description are unparalleled and I never tire of escaping into the beautiful world of Avonlea with Anne.

What’s on your bedside table to read next?

I have quite a pile of books on my list at the moment but at the very top is an exquisite-looking proof of Midnight in Everwood by M. A. Kuzniar. This is a literary retelling of The Nutcracker and it looks like it’s going to be an absolute delight.

If you’re an author who’d like to tell us about your Five Books, drop me a line at britlitpodcast@gmail.com with the subject line FIVE BOOKS. Priority will be given to those from a BAME background.