In case I wasn’t feeling inadequate enough about my upcoming Significant Birthday, Red has a list of books every woman should read before she’s 40.

Book Riot has a round up of 12 Winnie The Pooh things on Etsy to give your life whimsy.

Cosmo UK has a definitive ranking of 20 Goosebump books, based on how scary they were.

The Guardian’s Book Clinic recommends some escapist fiction to unwind with.

The Guardian also rounds up some great European fiction coming our way.

The UK’s largest publisher, Penguin Random House UK, has opened applications for WriteNow 2018: its flagship nationwide campaign looking for new writers and illustrators from communities under-represented on the nation’s bookshelves.

With the temptation of Netflix binges and a constant stream of online articles, can Emma Gunavardhana set aside time to actually finish one of the books she’s started this year? 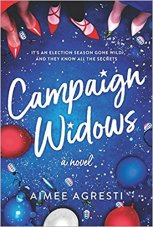 The New European reports on how a book could influence a divisive issue Ireland is set to decide. (e is published by Unbound, who, have I mentioned? are also set to publish my novel.)

is a form-busting novel that pairs a history of polar exploration with the story of an artist and her autistic sibling. Its author Alicia Kopf reveals the real life behind her imaginative adventures.

, spoke to The Independent about sexism in publishing, why we don’t need ‘strong female characters’, and inventing her own Gothic monster.

Female First has an interview with Aimee Agresti, author of the new novel Campaign Widows

, about a group of friends left behind in Washington, DC, when their significant others go out on the campaign trail during a zany election.

Female First also has a piece on a day in the life of Leigh Russell, author most recently of Class Murder

Literary periodical The London Magazine is launching a new literary award for debuts in partnership with law firm Collyer Bristow.

The winners of the 10th annual CrimeFest awards have been announced.

The Literary Consultancy has created an independent grant-making foundation and poetry award in memory of founder Rebecca Swift.

Crime author Kimberley Chambers and HarperCollins have launched a writing scholarship, the ‘Kickstart Prize’, in association with Peters Fraser and Dunlop Literary Agency and CrimeFest.