Howard Jacobson asks how many of us still read books in bed.

Graphic novel fans from Zadie Smith to Ethan Hawke tell the Guardian why they fell in love with the form.

Is Instagram the future for poetry? The debrief asks if our penchant for tweetable poetry is simply a relfection of our dwindling attention spans and heightened narcissism.

The Telegraph has a love letter to the nursery rhymes and a plea for children of the future to continue to learn them.

The shortlist for the Most Beautiful Book of the Year has been revealed.

. Meanwhile, in London, you can hear her speak at Stylist Live alongside Clara Amfo.

Zadie Smith writes about her love for New York.

The New York Times has an interview with Emily Wilson, the first woman to translate The Odyssey

Among recent reviews in the Guardian are First Person by Richard Flanagan,  David Bowie: A Life, by Dylan Jones, and Women and Power, by Mary Beard.

The Chancellor has heard protests of bookshop owners and other small buinesses loud and clear, so he’ll be raising the business rates very slightly less than he would otherwise.

The  books and pop-culture podcast Mostly Lit, highly praised by both the Guardian and the BBC, is coming live to the FutureBook Conference.

Ebook Deals of the Day

, by Gill Simms is just £1.99 on various ebook platforms today. (It’ll be out in the US 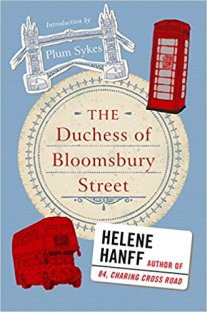 In the US, The Duchess of Bloomsbury Street

by Helene Hanff, author of the beloved 84, Charing Cross Road

Mostly Lit asks: what kind of reader are you?