Today is the 200th anniversary of Jane Austen’s death, and in celebration and commemoration of her life (and because it’s about time), the Bank of England has issued a new bank note. Not everyone is happy about the Caroline Bingham quote it bears, though.

Stylist explores how her books radically changed relationships and female desire, while Red online collates ten of her best quotes and a list of ten books inspired by Pride and Prejudice. Lit Hub discusses Jane Austen as a political symbol of early feminism.

The Guardian provides us with all kinds of charts related to the author, asks which is her greatest novel, and argues that Austen’s “earliest fiction reveals an anarchic spirit with a disdain for authority to match any modern adolescent“. And their guests on the Guardian Books podcast to discuss the author and her legacy are comedian Sarah Pascoe and author Lucy Worsley, whose book Jane Austen at Home

has recently been published.

Book Riot has all the Jane Austen content you could possibly wish for, asking us not to dismiss her as a writer of “silly things”, pitting her quotes against Trump’s tweets (!), recommending six contemporary and classic readalikes by authors of colour and contemporary YA retellings of her books as well as graphic novel adaptations, blaming/thanking her for a fanfiction addiction, ranking screen adaptations of her novels, and advancing theories about the queerness of Emma and the ranking of the novel of which she is the heroine at the bottom of one reader’s Jane Austen list. 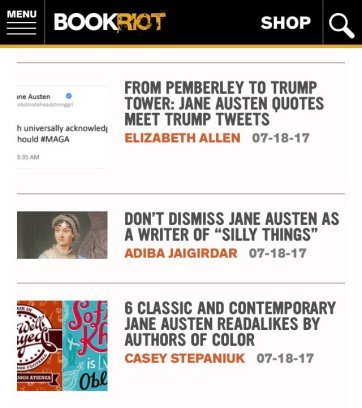 Plus, if you’re in the US, you can win a set of the clothbound editions of her books.

The Atlantic is also celebrating all things Austen, including a reflection on how she grew up from a teenage writer to a published author the age of the older characters she mocked and a piece on Colin Firth’s wet shirt and the female gaze.

… And in other news

In the Bookseller,  former Europe minister and author Denis MacShane argues that Brexit will have a major impact on the book trade.

The Guardian reviews Matt Haig’s How to Stop Time

EasyJet will make children’s books available on its flights as it launches an on-board library.

Publishers are increasingly asking authors to sign contracts “morality”-based clauses. We can take a guess at whose fault that is, but I shall continue not to mention him on this blog.